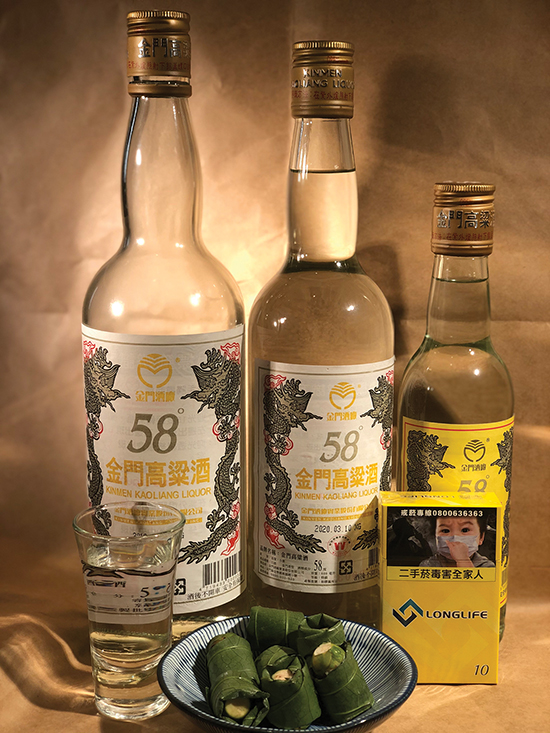 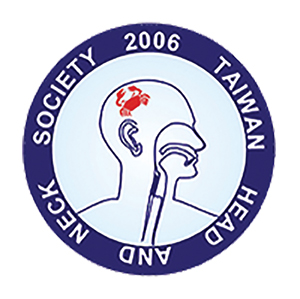 Alcohol drinking, betel nut chewing, cigarette smoking, and human papillomavirus (HPV) all contribute to head and neck cancer. Due to the consumption of betel nuts, cigarettes, and alcohol, Taiwan has a high incidence of head and neck cancer. Habits and exposures unique to Taiwan include the local specialty Kaoliang (sorghum liquor) with 58% alcohol by volume, millet wine with 15% alcohol by volume, and chewing betel nuts. These are effectively euphoric but may be carcinogenic for head and neck cancer (Picture 1). According to our observation, the incidence of HPV-related oropharyngeal cancer is increasing.

With the aim of improving public health, the Taiwan Head and Neck Society (THNS) was established in 2006. It was founded by Professor Sheng-Po Hao, MD, the first chair of the board, and joined by physicians committed to the research, education, and treatment of head and neck cancer in Taiwan. Since then, the number of members has increased from 94 to more than 500. The society strives to enhance the understanding of head and neck tumors in the domestic medical community, to encourage the clinical and basic research of head and neck tumors, and to promote the nation’s health through academic exchanges. The society’s mission is to promote the research and development of prevention, screening, treatment, follow-up, and support systems in basic clinical research for head and neck tumors. Most importantly, the society aims to encourage and consolidate friendship among colleagues. 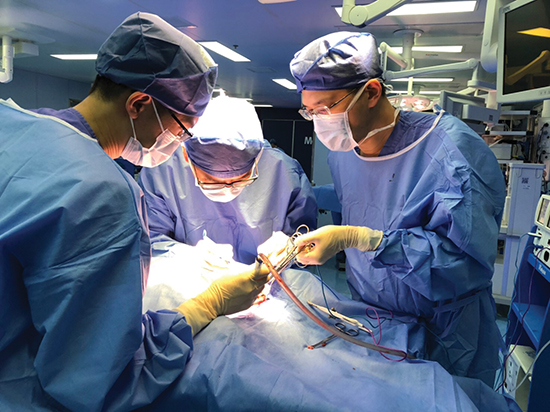 The society holds an annual society meeting (although this year’s meeting is postponed due to the COVID-19 pandemic) and has held seminars and workshops with several international societies in the field of head and neck, including the American Academy of Otolaryngology–Head and Neck Surgery Foundation, Japan Head and Neck Society, and Korea Head and Neck Society. We also held a joint society meeting with Hong Kong and Singapore in 2019. We have hosted education courses, including the head and neck dissection and hands-on cadaver workshops in Hualien, Taiwan; live swine head and neck surgery training course for residents in Shanghai, China (Picture 2); and head and neck ultrasound training courses. In addition we invite and match international fellow surgeons for training in the field of head and neck surgery in Taiwan. 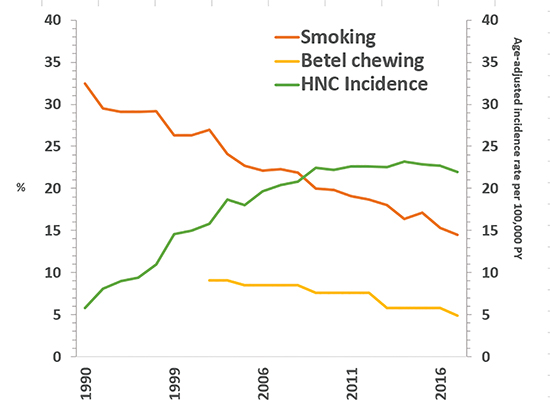 In the past decades, THNS and the people of Taiwan have succeeded to establish multidisciplinary management teams of head and neck. Microscopic reconstruction surgeries are routinely operated in all medical centers. Due to the promotion of healthy habits, the prevalence of cigarette smoking and betel nut chewing in the general population is gradually decreasing. We launched the oral mucosa screening program in 2004, which continues today. Through these advancements and efforts, the incidence of head and neck cancer has plateaued and appears to be decreasing in recent years (Figure 3).

Despite these accomplishments, we need to continue to work hard in basic research, patient survivorship, and life quality improvement. The society is ready to join the international community in the field of head and neck and welcome clinicians and researchers in this field to visit Taiwan.

For your Patients from ENTHealth.org – Vestibular Schwannoma (Acoustic Neuroma)

From the Education Committees – Treatment Modalities for Ménière’s Disease 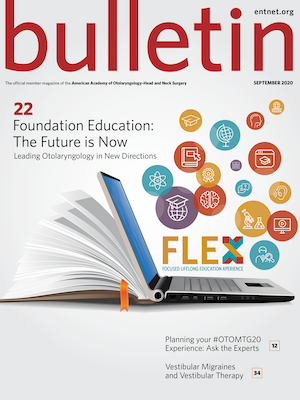 Complex Dizziness for the General Otolaryngologist

Dizziness is a complex symptom that often frustrates patients and physicians alike. It can affect adults of all ages and contributes to a significant decrease in patient quality of life. There are numerous possible etiologies of dizziness and various organ systems that could potentially be involved. The peripheral vestibular system is one possible source of dizziness and, as such, otolaryngologists are often involved in the care of these patients. 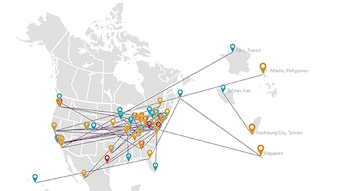 Some may think reviewing for medical journals is reserved only for physicians in clinical practice, researchers in academic medicine, or other seasoned healthcare professionals. “As a resident I thought peer review was restricted to faculty. The whole peer review process seemed like a mysterious black box,” says John D. Cramer, MD, assistant professor in the Department of Otolaryngology – Head and Neck Surgery at Wayne State University School of Medicine. 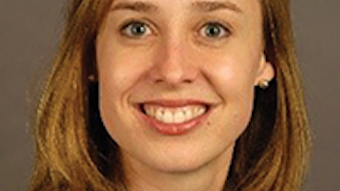 Jeffrey P. Simons, MD, AAO-HNSF Coordinator for Education, spoke with several FLEX Workgroup Chairs to get their insight on this new education product, what it’s been like developing the component tools, and how this will support lifelong learning and continuing certification. 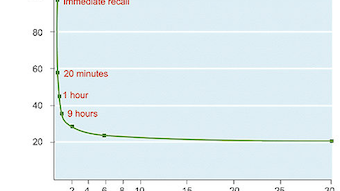 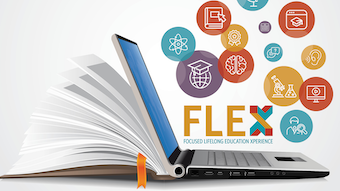 Foundation Education: The Future is Now

As I reflect on my first year as the AAO-HNSF Coordinator for Education, I am humbled by the steadfast commitment and accomplishments by the members of the Education Committee, Steering Committee, and our education committees across the specialty. While this year presented many unforeseen challenges given the complexity of the COVID-19 pandemic, our plans to implement an ambitious program set forth by the Future of Education Task Force have not been hindered. 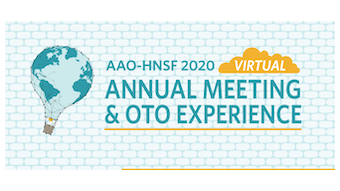 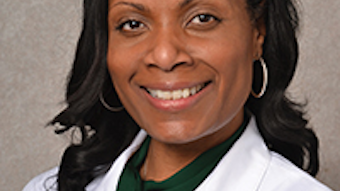 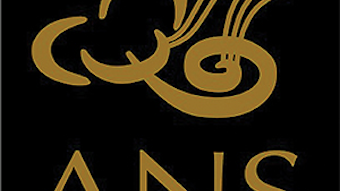 COVID-19, a virally-induced economic coma, race relations—“these,” as Thomas Paine wrote in 1776, “are the times that try our souls.” We face unprecedented challenges—how do we practice in a safe, secure environment that protects both patient and provider from the novel SARS-CoV-2 while continuing to provide the best care we can? 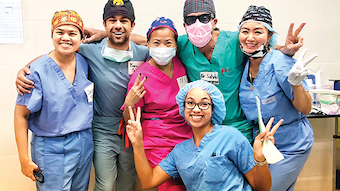 Upon arrival in Manila, I was greeted by the embrace of a balmy breeze and kisses of sunshine, cast-ing aside all jetlag, and melting memories of a harsh New England winter I had just narrowly escaped. I enjoyed a heavily roasted coffee with Benz Cueto, a man whose bright eyes and hearty laugh conveyed genuine kindness and a handshake and directness that alluded to prior military experience. 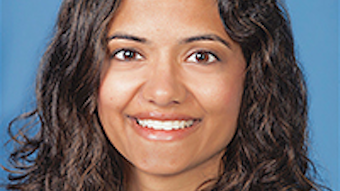 I once heard someone compare otolaryngology surgical training to fighting in a war—the sleep deprivation, the tragedies, the necessary mental toughness, and the camaraderie. Getting through that experience would have been nearly impossible without your second family, your tribe, your people—your co-residents and fellows. 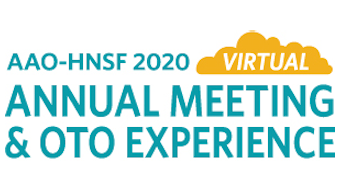 What is the utility of various repositioning maneuvers in the treatment of BPPV? Can you differentiate between vestibular migraine and Ménière’s disease? What are the steps in the management of acute vertigo? Answers to these questions and a wealth of additional information may be found at: www.otosource.org. 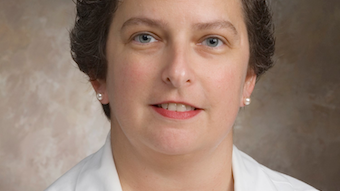 “Talk less. Smile more.” These are Aaron Burr’s first words of advice to Alexander Hamilton in Lin-Manuel Miranda’s hit musical Hamilton. Debuted in 2015, a filmed version was recently released online at a time when national awareness of identity has been honed laser sharp. Burr’s implication is that success, advantage, or survival may rest upon concealment of one’s real interests, or motives, or identity. 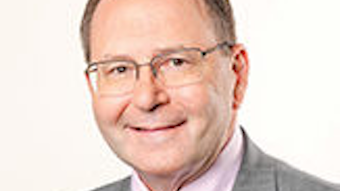 The Value of Community and CY21 MPFS Proposals

When the COVID-19 pandemic first hit the United States late last winter, I was optimistic that our planned 124th Annual Meeting & OTO Experience in Boston, MA, would serve as a gathering place for otolaryngologists from around the world to share their experiences in a collaborative, communal way that would facilitate a healing process for those encountering the devastation of the crisis. 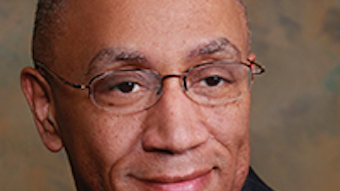 Getting to the Other Side of That Bridge over Troubled Water

As I reflect on this year, I am reminded of one of my favorite songs by Simon & Garfunkel, “Bridge Over Troubled Water.” A timeless song that crosses the spectrum of musical genres and has been covered by a multitude of diverse artists, including Aretha Franklin, Elvis Presley, Jon Bon Jovi/Richie Sambora, Bella River, and John Legend.